Shopping for Justice in Yuen Long 27/7 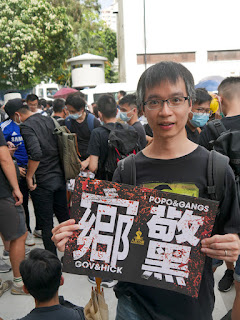 Despite the intense heat, an estimated 280,000 people reclaimed the town of Yuen Long in north-western Hong Kong in a mass act of defiance, last Saturday.

It was their collective response to the shocking mob violence by thugs at the town’s MTR railway station and the police failure to react to it, the week-end before.


The authorities had already declared the march illegal, on public safety grounds but attendees were undeterred. Many joked, saying they were just shopping, sightseeing, praying or on a Pokémon hunt.

“I am shopping for justice,” says Edward Ng Ka-fung a quietly spoken IT consultant waiting in the shade of a municipal building for the march to start. Ng says he has been on every recent protest march with his wife but with this one declared illegal by the authorities and with widespread fear of clashes with local villagers and Triad thugs, she has stayed at home this time.

“I don’t want to get beaten up but I just want to send the message that we not accept it (the violence of last week-end),” he says as we set off with thousands of others down Castle Peak Road, towards Yuen Long railway station. Many marchers wear hard hats, many wear black masks and most carry umbrellas to shield them from the fierce afternoon sun. There are young people, old people and I count at least three people in wheelchairs.

Yuen Long resembled one of those remote cowboy towns in classic Hollywood Westerns. Shutters pulled down on shop fronts, buses parked up and driverless at the bus station and shopping malls deserted except for protesters enjoying the chilly air conditioning. Only tumbleweed blowing down the street was missing from the scene.

The crowd had started gathering near the sports stadium opposite Yuen Long police station, a large concrete compound with conical watch towers on each corner like a fort. The cavalry who failed to arrive last week-end at Yuen Long MTR station, were safe and secure inside.

As always, the march started peaceful and orderly, despite the absence of any obvious leadership, the posters were witty and the shouted slogans subversive. 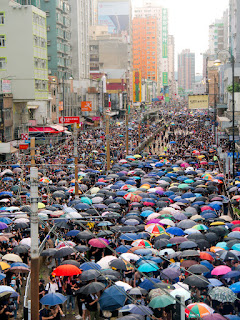 “Har-geng-haw-zee,” was a popular chant, meaning shame on the police.

Those attending made little or no reference to the unpopular Extradition Bill which triggered the latest wave of mass protests. Instead, they condemned what they see as police collusion with criminals and they call for the “liberation of Hong Kong” from Beijing-backed crony capitalism. In case you hadn’t noticed this is more than a protest now, it’s a revolution; the hard hat revolution. A revolution of our times.

During a brief refreshment break, I am approached by an “independent observer” from the Mainland, a euphemism for a PLA spy. He tells me how Western governments are influencing events on the streets. He speaks very polished English with a Beijing accent and says he is an export businessman from Guangzhou, specializing in trailers. He has all the sincerity of those scammers who hang around the Imperial Palace in Beijing and invite tourists for a cup of coffee, so their daughter can practice her language skills and then rip you off.

As he leaves, the hardcore protesters are preparing to get “geared up” in alleys and side streets. A ripple of spontaneous applause from bystanders greets one platoon of black-suited activists in masks and hard hats and armed with metal poles, as they march past purposefully.

It’s approaching party time in Yuen Long.  As the main crowd surges in silence towards the Yoho Mall which is adjoining the MTR station,  it’s time to put a hard hat on, just in case.

Posted by Stuart Heaver at 20:46 No comments: 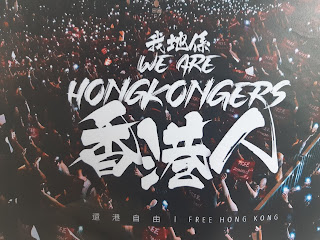 White shirted mobs assaulting members of the public with bamboo poles in an MTR station while the police turn a blind eye. There was human blood shed on the polished marble floor of a public transport hub in Hong Kong last night. It’s hard to digest. This is the safest city in the world, or at least it was.

There is no shortage of phone video footage from Yuen Long MTR station of terrified passengers standing in an open train carriage, trying to defend themselves with umbrellas, as thugs hurl abuse and attempt to beat them with sticks and poles. One unconfirmed report suggests a pregnant woman was beaten to the ground and one male passenger is in a critical medical condition.

The police were nowhere to be seen for more than 30 minutes and no arrests were subsequently made. There are widespread allegations that the mob had Triad affiliations and may even have been paid to exact some retribution on protestors, returning from a demonstration in Central that evening.

From all accounts the town of Yuen Long is now shut down with mobs prowling the streets like a dystopian scene from 1970s Haiti.

It was reported this morning that bomb making equipment was miraculously found in premises rented to pro -independence political groups who reported a break-in to police a few months ago. Police were reportedly "acting on a tip off". Really? Do they think we are all stupid and will all just swallow this garbage?

The political establishment is now running on empty in terms of credibility or legitimacy. Propped up by Beijing, by the corporate elite and now, it seems by organized crime syndicates. They remain completely impervious to the demands of ordinary Hongkongers.

No-one knows where we are all headed. It feels like a revolution but it also feels like a pending catastrophe. No-one is predicting a happy ending.

Posted by Stuart Heaver at 06:56 No comments: 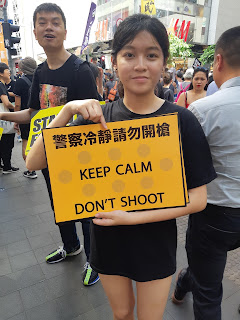 Posted by Stuart Heaver at 07:37 No comments: