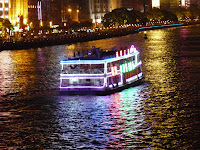 The world's economic centre of gravity is shifting east and China is ready and waiting.
Posted by Stuart Heaver at 04:40 No comments: