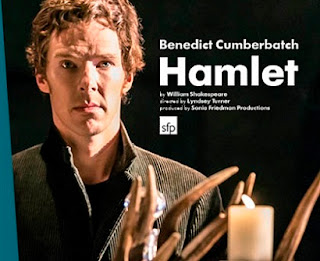 I was lucky enough to enjoy a memorable evening out a few weeks ago, with Benedict Cumberbatch and my mother in law.

He was starring in the National Theatre production of Hamlet which was showing at a cinema in Hong Kong and she was visiting from England. I was eager to see Cumberbatch in action after the penny finally dropped that he has become a huge media sensation in Asia. On a recent visit to Vietnam, he was the only subject the young female representative, meeting me at  Da Nang airport, wanted to chat about.

"I love Benedict...he is my lover," she confessed solemnly as we waited patiently by the baggage carousel .

The cinema was sold out though it has to be said, this production of Hamlet is average at best. Not surprisingly, it is very focused on the energetic superstar in the title role, as he dashes and sprints over the stage like a hyper-active labrador.  This interpretation  has the youthful exuberance of a sixth-form production and lacks a little soul and finesse.  While the innovation is to be applauded, seeing a play at the cinema is perhaps the worst of all worlds. You miss the intimacy of live actors and can't make up for it with sexy cinematography or special effects, like in Roman Polanski's classic film adaptation of Macbeth.

Anyone spending over three hours in a local cinema risks acute hypothermia, given the sub-arctic air conditioning preferred in these parts, so at least there was lots of energy to keep the audience's pulses racing.

The play was also a timely reminder of what a bloody good writer Shakespeare was when it came to dealing with those timeless political themes of ambition, corruption, injustice, deception and disorder. Some of his lines work as perfectly in Asia in 2016 as they did in London in 1597, when his work was first performed.  In Hamlet, when it all starts to go noticeably 'Pete Tong' and Polonius delivers the famous line  "there is something rotten in the state of Denmark," there can't have been many in the audience, who were not thinking about recent events in Hong Kong.

There is a very witty script for an updated and highly satirical 'Hong Kong Hamlet' that someone once lent me and surely it about time it was dusted down and performed.


"When sorrows come, they come not single spies but as battalions," laments Claudius and few would disagree with him, some four centuries after the line was written.  It's a shame Shakespeare  is not still around to write the next series of House of Cards and add a modest short cameo role for Asia's latest heart-throb, Benedict Cumberbatch.
Posted by Stuart Heaver at 00:47 No comments: