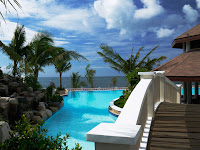 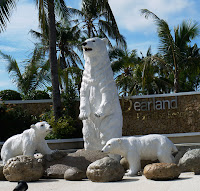 You don’t expect to see polar bears in the Philippines but having seen a chicken being checked in for the Manila flight at Iloilo airport, nothing surprises me in this part of the world.

I was returning from the noise, colour and partially controlled chaos of the annual Iloilo Paraw regatta when I saw the distinctive tail feathers of the chicken. They were sticking through a gap in the top of the cardboard box that was slightly too small to accommodate it. Its owner did not look the least concerned about its welfare as it joined his other baggage on the black conveyor belt, bound for the aeroplane hold.

I had been fortunate enough to be the (paying) guest of Mr Reinhold Schaeffter, at his newly opened, Bear Island Paradise Resort.

Three life-size stone polar bears greet you on arrival at the resort at Tigbauan, just down the coast from Iloilo city. Even though the freshly painted white bears are not real you still can’t repress a feeling of concern for their comfort and welfare as they stand in the concrete car park as the afternoon sun beats down with all its indiscriminate brutality.

Reinhold is a charming German banker (if you can imagine such a thing) who gently patrols his resort in his swimming trunks and straw cowboy hat like a benign King surveying his kingdom. He pauses once and a while to exchange pleasantries or share an anecdote with his loyal subjects.

He is a small man, probably in his early seventies, with parted white hair, a small red face and twinkling eyes. Queen to this modern day monarch of Bear Island is his elegant wife, Shirley.

The delightful small resort might be Reinhold’s folly, his investment, or even a sentimental gift for his wife to whom he appears totally devoted. No-one is quite sure.

Designed by a local architect, it is very luxurious by local standards with well-appointed cabanas, a huge swimming pool and freshly tended gardens. Unlike the Shangri-La or the Marriot though, locals are encouraged to come and picnic in the grounds for a nominal fee and neighbours just pitch up to use the bar by the pool or meet with friends.

The resort sponsored and hosted the local jet -ski championship reception. It was a lavish affair with outside caterers and fresh white linen tablecloths. The local picnic parties could hardly believe their good fortune. For their modest 150 peso fee they discovered that champagne, fine seafood and roast suckling pig was included amongst the fountains and the palm trees.

The local Mayor, a young good looking man with an expensive Manila haircut and manicured nails, is often seen enjoying a quiet drink in the shade or in animated discussions with his host.

From the terrace beyond the infinity pool, white or blue triangular sails of paraws, the traditional sailing canoe with two bamboo outriggers, skim downwind towards the fishing villages further down the coast. Local children scream and play in the surf.

I suspect we might be the first and only guests in the resort and the charming staff or Reinhold’s Angels as they are known are inexperienced but extremely attentive. There isn’t a restaurant yet but breakfast and snacks are fixed in Shirley's private kitchen. Dinner can be taken at a neighbouring hotel a short walk down the beach.

At dusk a small army of frogs appear on the lawns waiting patiently for the garden lights to be switched on to attract the bugs. During a power-cut Reinhold and Shirley organise buckets of water and offer the use of one of their private apartments.

One evening after a private traditional German dinner hosted by Reinhold and Shirley complete with sausage and Bavarian ale, we continue conversation about Vietnam, London and the plight of the Euro, over seven-star Metaxa.

“We must help the Greeks in very way we can” says Reinhold as he offers another glass of the liqueur.

We raise our glasses and toast the Greeks.

And given the current state of the European economy, that’s a pretty majestic gesture.