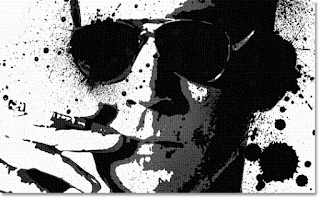 It is a bitter disappointment that one of my literary heroes and second-favourite American writer (after Hemingway) is not still with us to offer his acerbic analysis of the election, and subsequent inauguration, of the orange-haired narcissist and sociopath, who now leads what used to be called ‘the free world’.

“We have become a Nazi monster in the eyes of the whole world—a nation of bullies and bastards who would rather kill than live peacefully,” wrote Hunter S Thompson in a frenzy of righteous scorn provoked by his nation’s prosecution of the Iraq War.

The seasoned political journalist and writer of great wit, originality and verve who employed razor-sharp and visceral prose, died in 2005. He was the self-styled “freak” who confronted bullies, hypocrites and bigots, and those “flag-sucking half-wits” who supported them.

Thompson liked to quote Edmund Burke who said the only thing necessary for the triumph of evil, is for good men to do nothing and he would not have been content to just wring his hands in despair or whine in moral outrage on social media, about odious President Trump.

Though the hard-drinking, gun-toting and often drug-addled, Thompson was not an obvious paragon of virtue, he possessed a profound sense of liberal justice and was never slow to confront oppressive, totalitarian, corrupt and fascist tendencies, wherever he detected them. Over his years of reporting, he developed a talent for hitting the political nail on the head, with his unique uncompromising style.

“At the end of the decade,” he wrote of the 1990s, “no one will be sure of anything except that you must obey the rules, sex will kill you, politicians lie, rain is poison and the world is run by whores.”

One can only speculate about what he would have made of a political era where inheriting lots of money and being popular on reality TV, were the key qualifications for holding the highest offices of state. “Doom is the operative ethic,” he once wrote and when he describes “the ominous polarization between right and wrong,” he could easily be referring to 2017. Donald Trump is a monster-ego, fuelled by undiluted hubris, created in 1990s America and Thompson could sense his creation in his own dystopian visions.

“He is like some atavistic endeavor on speed- just another stupid monster as Attorney General of the USA, a vengeful jackass with an IQ of 66,” was his description of John R. "Jay" Ashcroft who he also regarded as “dumb as rock.”  Perhaps, like Thompson, more should just tell it how it is and give up excusing or seeking to rationalise those who support bigotry, ignorance and greed.

“They speak for all that is cruel and stupid and vicious in the American character. They are the racists and hate mongers among us—they are the Ku Klux Klan. I piss down the throats of these Nazis. And I am too old to worry about whether they like it or not. Fuck them.”

Posted by Stuart Heaver at 00:04 No comments: