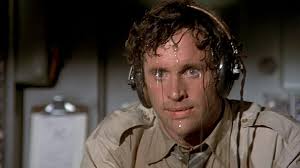 Now temperatures are soaring to inhumane levels in Hong Kong, it is time to suffer the season of ultimate social indignity.

By now I should be conditioned to the anxiety of being witnessed melting uncontrollably in rivers of sweat, like the traumatised ex-Vietnam pilot Ted Striker, in the movie Airplane but like Striker, I just can't get over it.

While the city's urban elite remain insulated in their own artificially controlled arctic microclimate, from temperature-controlled chauffeur driven limousine to air-conditioned office block, they remain blissfully unaware of the cruel embarrassment us lesser mortals must suffer. They have probably never even heard of a 'three shirt day'.

The  three-shirt procedure is mandatory for those  forced to venture outside  into the huge open air pizza oven to stagger to bus stops, ferry piers or MTR stations.

For those not familiar with the protocol, it necessitates a replacement shirt being concealed in a small discrete plastic bag together with a small bottle of highly pungent deodorant. Shortly  before reaching the intended destination, it is necessary to dive discretely into  a conveniently located public toilet. Here,  start to unpeel the offending wet shirt (shirt one) that has adhered itself to your skin during the journey in the searing heat.

A dry replacement can then be put on over flaccid damp skin after a liberal dosing of toxic deodorant has been applied to the upper body. Always wait at least three minutes to dry and avoid the temptation to use toilet paper to mop excess moisture from your upper body. This can result in tiny fragments becoming attached to eyebrows or other body  hair, giving colleagues the misleading  impression that you are suffering from a rare and contagious dermatological disorder.

Shirt three remains in a reserve plastic bag in case of any unexpected social invitations that evening. If so, the offending shirt (2) is  normally removed  in a small toilet cubicle in the bar or restaurant. This exercise often requires the agility and grim determination of Houdini escaping from a strait jacket.

Abstaining from this golden rule, as I did recently for an informal party at a neighbour's house, a short walk away from my home, will only produce tragic results. Even though the sun had set and I had taken  the precaution of walking at a funereal pace, it did not prevent me bursting into spontaneous fountains  of fluid by the time I entered the party. My light-blue shirt (always a high risk sweat colour) had stuck to me like glue, so that my nipples protruded from the sweat-soaked cotton in a revolting  limpid mess.

The desultory party small talk stopped abruptly apon my dripping entrance.  The  host took one horrified look at me and said, "please, go inside and I will find you a shirt to wear. " It was the calm matter-of -fact paternal tone often reserved for a small child who has accidently defecated in their trousers.

A friend told me later that  it was the first time he had ever heard of anyone being offered a replacement shirt on arrival at a Hong Kong social engagement and he has lived here for over 37 years.

The host kindly produced three short sleeve shirts on a hangar and asked me to choose one. The first had tiny motifs of Bob Marley spread across it, the second was a sick mustard colour so I opted for the third, an innocuous faded blue floral patterned print.

I decided to spend the remainder of the party sat very still within close range of an air conditioning unit but the final indignity was yet to come. On making my excuses, hoping at least to make a graceful exit the host insisted on having his shirt returned.  He explained he was about to go on holiday to Europe and it was one of his favourites. I paused hoping in vain that this was an ironic joke as all eyes were turned to me once more.   I slowly removed his shirt and  left, rather self-consciously and topless, to make my way home in the dark.
Posted by Stuart Heaver at 02:22 No comments: