There's a rat in the kitchen...or is there? 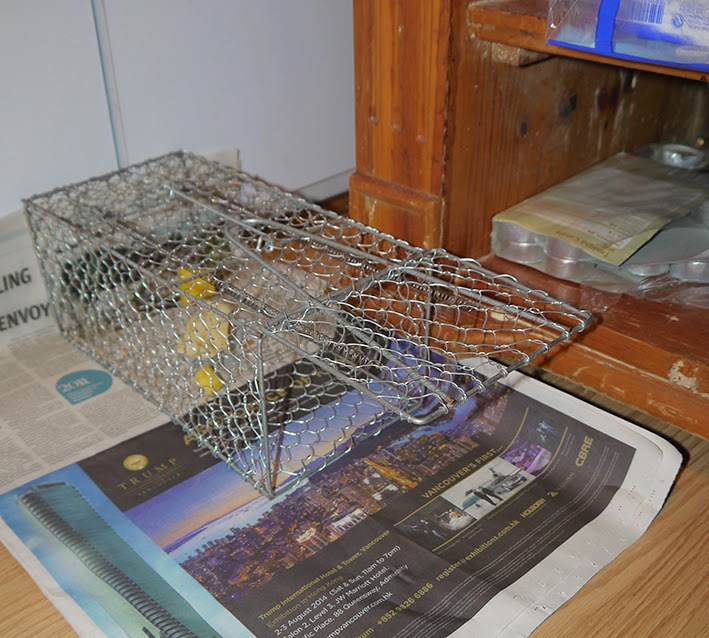 It is hardly cause for acute alarm when there is evidence of a tiny mouse in a flat, particularly when you co-reside with poisonous centipedes, burping toads, cockroaches, geckos and the occasional snake.

The first tell tale signs of our furry visitor were little pellets of black poo in my wife's knicker drawer.

It was early days in our epic challenge with this uninvited guest but in retrospect, it was the first indication that this was no ordinary rodent.  Subsequent weeks were to confirm this was no less than a super-rodent with an apparent weakness for junk food and  a perverse obsession with women's underwear.

Over recent weeks this little fella has become increasingly cheeky. Reluctant to encourage his nocturnal wandering around my wife's lingerie, we decided to close the kitchen door overnight. The next morning revealed that he had chewed through the door frame (presumably in a desperate attempt to escape and surround himself in lace and silk) leaving a significant pile of wood shavings and brick dust on the floor. He has also scaled the highest shelves in the kitchen and deliberately tipped my emergency rations of pot noodle on to the floor below, splitting the carton and allowing him a salty and very unhealthy snack.

Having developed a worthy respect for my adversary, I was slightly hesitant to revert to the local Chinese anti-rodent solutions that can verge on the barbaric. Instead,  I tried opening the kitchen window and closing the internal kitchen door in case we had blocked his means of escape. Things looked encouraging for a couple of days except that a large Huntsman spider took advantage of the open window to gain access and take up residence in the cupboard under the sink where he remains getting bigger and more grumpy. When there was no immediate sign of super -rodent, we deluded ourselves that he had returned to his family in sleepy rodent-ville, deep in the Hung Shing Ye jungle.

And then one evening, two days later we saw him , darting under the gas hob towards the pot noodles and he did not look like a rat or a mouse. He (or she) actually looked quite cute (ish) with pointed ears and legs that splayed out at the back like a squirrel. This confirmed sighting presented the perfect opportunity for our friends to play the role of expert zoologist and confident identifications ranged from a possum to a ground squirrel and even a mongoose.

Meanwhile our bananas were being eaten in greater quantities and when I left some English muffins on my desk inside my rucksack after a late night out, he found those and gobbled them up too.

The gloves were off. We had clearly exhausted all diplomatic avenues and it was time for tough action against this unilateral and unprovoked terrorist rodent attack. A trip to the hardware stores in the village highlighted a number of solutions. First I was offered a small clear plastic bag from under the counter with a skull and crossbones crudely printed on the side above a forbidding label saying 'poison'. The storekeeper refused to take any payment but insisted that I must not accept it if I had children or maybe he meant if I wanted to have children. In another store I was offered a solution which, judging by the illustration the side of the box, was like fly-paper for mice and rats. This highly effective adhesive pad would ensure that any passing rodent would just simply stick to it. But what then, I thought?

Finally, I stumbled across the perfect solution. For a mere $35 HK I procured an intricate wire cage with a spring door that can be baited, in this case with the obvious choice of English muffins, banana and a pair of lacy panties from Marks & Spencer. This will be humane, effective and Monsiuer Rodent can be released into the wild several kilometres from my pot noodles and my wife's underwear.

So tonight is the big night in our struggle with super rodent. The bait is set and the lights are dimmed. Game on my little furry friend. The morning will reveal if I have finally outwitted my worthy yet elusive opponent and he can be returned to the wild with the other rats, possums, ground-squirrels and mongeese. Or will this be the year of the rat, after all?
Posted by Stuart Heaver at 05:46 No comments: