The taste of China 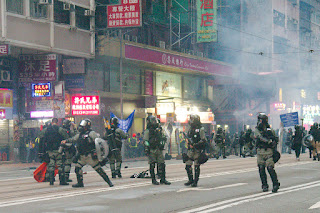 Might triumphed over right today at 11pm local time, when Beijing approved a new security law to be imposed on Hong Kong in violation of the 'one country - two systems' principal. It lists four categories of offences – secession, subversion, terrorism and collusion with a foreign country or external elements to endanger national security. The maximum penalty for each crime is life imprisonment and a new Gestapo-style security agency will be established in Hong Kong to investigate political cases and “strengthen the management” of foreign non-governmental organisations and media agencies.

Make no mistake, this new law sanctions a police state and outlaws anything that Beijing considers to be a threat to national security which is a euphemism for anything that the ruling Communist Party of China (CCP) disapproves of.

As I write this, citizens I have been following on Twitter for months are cancelling their accounts and pro-democracy activists are disbanding their groups for fear of being arrested, extradited to Mainland China, denied a fair trial and spending the rest of their lives behind bars in a grim prison in an unknown location. This isn’t a theoretical civil rights issue; this is raw fear.

One year ago, on July 1st 2019, hundreds of thousands, including me, marched against the proposed Extradition bill. It was a positive, peaceful and creative campaign which was ignored and then oppressed until it descended into a series of street confrontations between police and protestors.


I make no claims to be one of the regular battle-scarred front-line news reporters from that period but by November, I found myself taking refuge in a small burger restaurant in the Wan Chai district of Hong Kong, weeping and sniffling uncontrollably from tear gas inhalation.

I had spent the previous few hours covering the local election hustings in nearby Victoria Park which was broken up by baton-wielding riot police firing tear gas indiscriminately into the crowds which included families with young children. I witnessed an election candidate called Richard Chan, a grey-haired middle-aged man with spectacles, being pepper sprayed in the face by police officers, violently wrestled to the ground and made to kneel while he was handcuffed. He was clearly shocked and distraught and he told me he had no idea why he had been arrested. 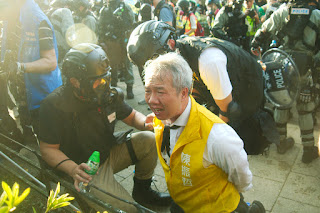 The burger bar had become an improvised first aid station for press, election candidates and protesters as a street battle raged outside. Staff calmly sealed the glass doors with wet towels to keep out the tear gas.  I could see residents, shoppers and tourists outside dashing for cover to avoid the toxic fumes billowing around.

Police had just started using a new type of CS gas sourced from undisclosed suppliers in Mainland China. It penetrated most types of gas mask (including mine) and had a thicker and more acrid synthetic taste. It hurts. While I knelt on the floor of the restaurant and cursed about the new gas, a volunteer paramedic washes my eyes out with saline solution.

“What the hell is that stuff?” I asked him.

“That my friend, is the taste of China” he replied.

This draconian law is more of the bitter taste of the authoritarian government of China but few will stand up for the courageous people of Hong Kong and their ideals. Senior pro-Beijing figures in Hong Kong were enthusiastically endorsing the law before they knew what it contained. There is too much money at stake and too many craven vested interests ready to kow-tow for any serious objections to be raised. 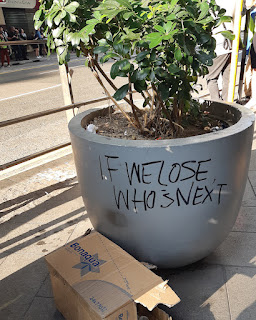 Hongkongers will be left to fight for themselves despite the impossible odds but who will be next to sample the taste of China?

Posted by Stuart Heaver at 13:48 No comments: