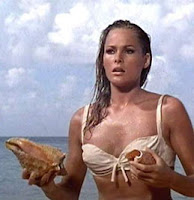 Finally, thousands of middle aged men can be liberated from the secret aspiration to be James Bond that has dominated their life since Ursula Andress emerged from the Caribbean in Dr No, in that swimsuit.

After the matinee performance at the Odeon Leicester Square on Sunday, there seemed to be universal approval for the Quantum of Solace, starring Daniel Craig.

The latest 007 production is an excellent action movie delivered at a breathtaking pace but something very subtle had been lost from the famous lead character.

Daniel Craig is probably a superior actor than any of his recent predecessors but his version of Ian Fleming's hero is just a little too cold and brutal to fit the true Bond model.

He is highly credible as a Special Forces squaddie, who was never loved much by his Mum.
But where is the savoir faire, the love of pate de fois-gras, the deft quips in the face of acute danger, the elegance combined with the casual brutality?

In a valid attempt to give the lead role some depth, Mr Bond has become a bit of a bore.While one might expect an evening with Messers Connery, Moore or Brosnan to include fine restaurants, beautiful women, fast cars and a subtle assassination or two- one would fear that an evening out with Mr Craig would more likely result in a bloody fight in the nearest pub car park.
Posted by Stuart Heaver at 09:10