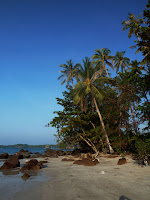 There is a resident three legged dog at Coco-Cape Resort, Ko Mak where we are spending Christmas.
The waiter says she is very old and she hobbles around the dining tables sadly before collapsing in the sand.
Thankfully, even on Christmas Eve, there are few signs of traditional Christmas festivities except the model Father Christmas resplendent in a red velvet suit. Santa has been inserted into the bows of a dilapidated wooden boat dragged up on the beach. He is holding some reins but as the boat points into wind it looks more like he is holding the painter of a speedboat. In the stern of the blue boat a hammock has been rigged, presumably in case Santa should feel the need for a siesta later on his journey. Instead of presents, there is a loosely assembled pile of coconuts.
It’s a worrying sign that the staff have taken to wearing those cheesy Santa hats in the burning sunshine and 30 degree plus temperatures. They wear them with an excited pride and I have even seen one or two wearing them off duty.
“Are you staying just for Merry Christmas or Merry Christmas and Happy New Years?” they ask you cheerfully as you scramble out of the pick-up truck to check in.
There is no chance of a white Christmas here but the wind has been very strong over the last two nights. Our small hut sits on stilts above the ocean and as the tide rises under us and the sea batters the shoreline powered by the strong northerly wind, it’s like being at sea in a storm in a boat that does not move.
The young Polish couple in hut next door confessed that when they were awoken at 3am by the sound of crashing waves underneath their bed they feared a Tsunami had struck.
It’s very romantic to lie in bed at night with the doors of our hut opening onto the restless sea with white caps visible in the darkness. I insisted on leaving the door open and dispensing with the mosquito net only to be eaten alive by sand-flies seeking shelter from the gale.
In Thailand, the backpackers, perverts, winos and free-loaders have all returned home for the festive season and Ko Mak was never really their scene anyway. No cars, no night-clubs, sleazy bars or high rise hotels here.
Our fellow guests are mostly young families from Scandanavia or Eastern Europe escaping the biting cold of home, some romantic couples from Asia avoiding intrusive family questions and, of course, the single ladies of a certain age.
These affluent professional women in their forties who holiday conspicuously on their own are becoming more prevalent in Asia. Accompanied by no more than a laptop computer, or a more likely an IPAD, they seem to take traveling in isolation to new extremes.
While families or couples may smile benignly in your direction or exchange a brief greeting en route to breakfast, she will avoid eye contact at all costs. She will even find an urgent need to rummage for something on the treeline rather than pass you on the beach. She swims alone in the pool early in the morningand she eats alone in the restaurant in the early evening, engrossed by private data on her computer screen.
There is something quite deliberate and focused about her solitude.
No roast turkey this year. Just huge deep fried prawns and delicious seafood at the beach café.
No bracing walks through snowy woods and fields with the mad big eared one. Just endless swimming in perfect blue seas, an occasional massage,or a gentle cycle through shady rubber plantations.
No Queen’s speech to avoid this year. Just quiet talks on the end of the sun- bleached timber pier which stretches out into the Gulf of Thailand.
No port and stilton. Maybe just a glass or two of local Sang Som rum which softly erodes the brain and stimulates weird dreams of ships captained by Santa Claus and beach parties with dancing three legged dogs.
Posted by Stuart Heaver at 19:15