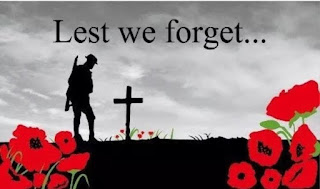 Remembrance Day was observed in the UK last week with a dignified two minute’s silence but there was no commemoration for the tens of thousands of families mourning the victims of COVID-19.

There were no crowds at the Cenotaph in London this year, or ranks of marching veterans of course, because the nation is in lockdown. Yet the unprecedented combination of Remembrance Day and a lockdown to combat a deadly pandemic, did not prompt any sort of memorial event for those lost to the disease.

Of course, these grannies, grandads, uncles and aunts, were not in uniform; they did not die in battle or while defending freedom; though surely their families deserve a whisper of comfort. An ounce of common compassion.

The official total is 56,698 COVID-19 deaths registered in England and Wales, up to 30 October 2020 (31,339 men and 25,359 women) but there have been no two minute's silence, no floral tributes, no doorstep applause and no high-profile services of remembrance.

The number of deaths from COVID-19 in England and Wales is greater than the Luftwaffe caused during the Blitz of London in World War Two. It’s now a greater loss of life than the Black Death and the Great Plague. It’s more lives than the Royal Navy lost in the whole of World War One and that took four years, not eight months.

Yet even on Remembrance Day, it seems these dead are already forgotten and their families apparently abandoned to grieve alone.

Just imagine, if 56,698 people had all died in a terrible fire in a sports stadium, or in a brutal terrorist attack or in a natural disaster- a tsunami or an earthquake say. It’s hard to imagine everyone would just carry on. No black armbands, no services of remembrance, no tragic personal anecdotes of grief and loss, inundating TV and social media.

Officially, one in 85 people in England and Wales are currently infected with COVID-19 but many people I speak to think the pandemic has been “over blown”. A few think it doesn’t really exist at all. Others point out that lots of people die in winter anyway or suggest it only seriously affects ethnic minorities in the north of England.

There is an online petition to establish a UK national holiday in remembrance of the victims of COVID-19; as of today, it has 56 signatures.

According to the Office of National Statistics There were 1,379 deaths involving the coronavirus (COVID-19) in England and Wales in the week ending 30 October 2020 but we are not told who they were, or where they were, or how they may have contracted the disease. It feels like a conspiracy of silence.

These are dangerous levels of delusion and denial about a deadly disease on a grand scale and my suspicion is that it is no accident.

Because if more attention is drawn to the epic scale of this public health disaster and the mass aggregate of personal family tragedies that it consists of, some people might want to ask the forbidden question which those in authority must fear most: why are so many people in Britain people dying?

According to John Hopkins University, the UK’s per capita death rate from COVID-19 is the fifth worst in the world.  Only Belgium, Spain, Argentina and Brazil fare worse than the UK in terms of deaths per 100,000 of population.

More people might also wonder why a rich nation like the UK, with a well-established public health organization and a comprehensive state- funded national health service, staffed by dedicated professionals, is doing quite so badly ?

Britain may have talent and it may have a great bake off too but, lest we forget, compared to most nations in the world its government has proven to be abject at preventing tens of thousands of its own people dying from an infectious disease.

The least they might do is acknowledge the scale of the tragic loss and offer a dignified commemoration for the dead and a crumb of comfort to the grieving.