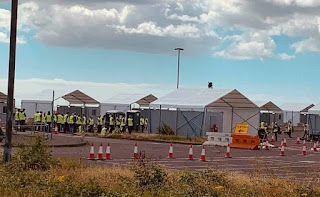 I tested positive for COVID-19 yesterday.

There is nothing exceptional about that of course. The day that I sat in my car on a grey and desolate airfield in Kent (right), carefully sticking a swab into my nose and throat, there were 16,840 new COVID-19 cases reported in the UK.

There have been in excess of 7.8 million confirmed cases in the UK to date and 1,449 people in Britain died of COVID-19 just on the same day I was tested.

One of them, was the national hero, Captain Sir Tom Moore. That was his reward for raising more than £32 million for the NHS and offering a heart-warming news story during bleak times.  In a political gesture so cynical, it made me wince; the Prime Minister initiated a public clap last night in Captain Moore’s honour, when a public apology might have been more appropriate. I assume the Prime Minister calculated that the more we stand, slapping our hands together like well-trained performing seals, the less we might notice the catastrophic scale of the death toll, including so many of the frail and elderly, like Captain Moore.

The Prime Minister stated, without irony, this was a suitable way to honour Captain Moore and the NHS staff, he raised money for.  Surely, containing the disease which killed the Captain would have been a more fitting and lasing tribute. As usual, Mr Johnson omitted to mention the many thousands of other UK victims of COVID-19, who have all lost their lives on his watch.

Mr Johnson is not fit to lace the boots of men like Captain Moore but by perfidiously associating himself with a nationally admired figure, Mr Johnson neatly deflected attention from his own bungling incompetence. ‘You can fool most of the people most of the time,' seems to be the Prime Minister’s sole political mantra.

My COVID-19 case hardly merits a mention. Fortunately, my symptoms are minor but my more pressing concern is that I made a routine care visit to my 86-year-old mother, the day before my symptoms kicked in. Mum’s Alzheimer’s is acute now and apart from her dedicated carers, the visits from me, or my brother, are the only human contact she has. I wore a surgical mask as I always do, but Mum told me she was feeling cold, so I wrapped her in a cardigan and a blanket. In doing so, I may have inadvertently killed her but we won’t know for sure for another six days. Ironically, she received her first vaccination the day after my drop in.

Not that it makes much difference now, but my wife and I have been very cautious throughout the pandemic and complied with the so-called lockdown rules. Having witnessed the impressive public response to the coronavirus in Hong Kong, we remain avid mask wearers and meticulous hand-washers. The only person to enter our home since October last year, was the man who replaced our boiler and that was several weeks ago. We have no idea where we might have caught it. The location of our local infection hot spots remains a mystery. A year after this all started, it’s like stumbling around a minefield, wearing a blindfold.

So, forgive me if I don’t embrace the febrile celebration of the great British vaccination roll out or any government-inspired bouts of mass applause. Somehow, the experience at the Manston Covid-19 Test Centre, followed by a rushed explanatory email to Mum's carers on receiving the result, while feeling like a victim of a violent mugging, did not quite put me in the party mood.

There is zero justification for celebratory rhetoric or triumphant bombast. It’s not only inappropriate, it’s disrespectful to those who have lost family members due to the Prime Minister’s abject mishandling of this crisis. A recent You Gov poll reported that one in eight Britons know a friend or family member who has died of COVID-19.  Another indicates that as of today, only 34% of people believe the government has handled the pandemic ‘very well’ or ‘somewhat well’.

More than 108,000 people have died in the UK within twelve months from a single cause. It’s the third largest per capita death rate in the world.  When I told the NHS track and trace representative who called me today about the one person, I had spoken to on the day I became symptomatic, he advised me that unless I could confirm that the contact had definitely come within 1 metre of me, or within two metres for a 15-minute duration, he would not include it.

“We don’t want to ask people to self-isolate unnecessarily,” he assured me.  How many more deaths before it will be necessary to tell someone who has been in direct indoor contact with a confirmed COVID-19 case, to isolate for ten days?

No surprise that the UK has a worse record than the USA, Brazil, France or Italy. And it’s much, much worse than Hong Kong, Australia, Taiwan, Korea or Vietnam, which have largely contained the pandemic with proven measures like strict border controls and rigorous track/trace/quarantine protocols. The UK government refuses to adopt these measures even after 108,000 deaths.

This failure is possibly grounds for a public enquiry or even a series of private criminal prosecutions but it is certainly not a reason for celebration or applause.

Very well said in a nutshell the UK gov blew it