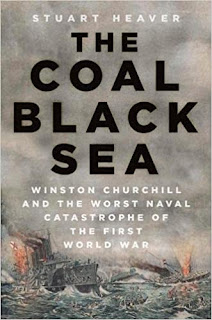 I am extremely proud to announce that after eight years of research, my new book, The Coal Black Sea, Winston Churchill and the Worst Naval Catastrophe of the First World War is published today by The History Press, (ISBN: 9780750999601).

On the morning of 22 September 1914, when three Royal Navy armoured cruisers were sunk by a German U-boat, in the southern North Sea, just six weeks into the First World War, 1,459 men and boys lost their lives, shocking the entire British nation. When HMS Hogue, Aboukir and Cressy sank, the coal from their bunkers turned the sea inky black for as far as the eye could see, as hundreds of naked men struggled for their lives in the frigid water.

One of those lost that day was my great Uncle, my grandmother’s older brother, Leading Seaman William J Potter RFA. Six of those lost came from my home town of Whitstable in Kent. The ships were originally designed and built on the Clyde in Scotland for the China Station in Hong Kong. There was next to nothing in the way of support for the victim’s families ashore, apart from an embryonic armed forces charity called SSFA (later SSAFA). There were lots of personal connections for me.

Initially, I was intrigued why such a high profile wartime naval incident which made such a dramatic impact could have such a low profile. When I served in the Royal Navy, none of my family told me about Uncle Will being a First World War hero or his death in HMS Cressy. The incident had been successfully brushed under the carpet for a century, until a retired Dutch physics lecturer called Henk van der Linden, wrote a book about the so called Live Bait Squadron and initiated a major commemorative event at Chatham Historic Dockyard in 2014. Even then, it was never explained why it had taken so long for these brave men to be recognised.

My aim was to dramatically recreate the story of the incident as a gripping non-fiction narrative from the perspective of those serving at sea based on numerous press reports from survivors, from official records and accounts from respected historians. It quickly became apparent that things didn’t add up. At the time, this was the biggest story of the war—it made international headlines and questions were asked in parliament. The king was distraught and the Prime Minister Asquith distressed. The death toll was greater than Trafalgar or the sinking of the Lusitania. It was only a few less than the Titanic’s death toll, yet hardly anyone has heard of it. The incident struggled to escape from the margins of official histories. It was never classified as an official action and was generally described as a sort of tragic anomaly of little relevance to the war at sea. It didn’t even have a proper name. Something didn’t make sense.

In search of an explanation, I explored the dusty corridors of Whitehall and the lumbering bureaucratic edifice that was the Admiralty—responsible for all aspects of the largest Navy in the world, from pay and uniforms to shipbuilding and weapons development.

And it led me to the man in charge. The 39-year-old charismatic, energetic, industrious intellectually agile, brash, controversial and highly ambitious, First Lord of the Admiralty, Winston Churchill. The man with the Midas touch.

I knew little about Churchill other than his glowing reputation as the greatest Briton of all time. I certainly had no axe to grind but the more I discovered about the first nine months of the First World War at sea, and Churchill’s response when things stated to go wrong on his watch, the more horrified I became.

If you read the book you can draw your own conclusions but even the most ardent admirer of the great man would have to concede it was not his finest hour, by any means.

My own conclusion, for what it is worth, is that, not for the first time in history, or the last, brave men (it was men in this case) were sent to war and performed their duty with distinction and cheerful stoicism, without the necessary tools for the job. They were then artfully and brutally stitched up with sophistry and spin for political expediency, while their grieving families were left to fend for themselves.

Some might say, nothing changes but at least a humble and noble attempt has been made to put the record straight on behalf of the 1,459, and Uncle Will.

Even 108 years later, the truth should still matter. 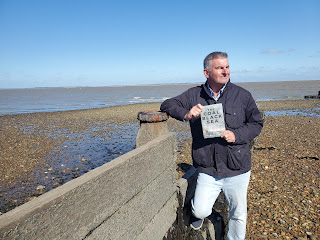