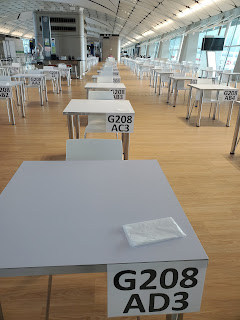 These days, you are more likely to be locked up than locked down, in Hong Kong.

This once freewheeling, transient, cosmopolitan and welcoming city has adopted the themes of captivity and isolation with remarkable enthusiasm. If you are looking to visit from the UK or just about any other western nation, you might as well forget it - unless you are an official resident with a valid ID card, double-vaccinated, desperate and/or deranged.

At 21 days, Hong Kong holds the world record for the world’s longest and strictest COVID-19 quarantine incarceration requirement. It's known locally as Q Prison. Even gaining entry to this enforced hotel imprisonment is a protracted test of patience.

The last time I saw Hong Kong airport in May 2020, it was mostly deserted but it still resembled an airport. This time, it resembled a mass human transit station. Long lanes; multiple signs; make-shift Perspex cubicles; solemn officials; forms to be completed and checked; QR codes to be scanned; PCR tests to be performed; certificates to be issued and advisory booklets to be read.

One masked man behind one of the many cubicles cheerfully informed us that if our 21-day compulsory hotel quarantine was breached for any reason, we were liable to a HK$25,000 fine and six months imprisonment.

Having been officially processed and duly warned, inmates stumbled, exhausted, to the holding area.  Wearing green identity labels, secured around our necks on a red lanyard, we all located our coded and designated white table and chair.  A matching white neatly-folded plastic trash bag was assiduously placed in the left-hand corner of every identical white desk.  This must be what it’s like to be a bewildered specimen in a large-scale laboratory experiment.

Knowing this could be my last opportunity to walk more than five paces in the same direction for three weeks, I frantically paced and jogged up and down the polished marble floors of the airport concourse, like a demented marathon runner, warming up for the big race. No one would be departing from these departure gates for anywhere exotic, any time soon. These are all human holding zones now, full of weary and compliant passengers, all awaiting to start their sentence in Q-Prison.

Hong Kong has a zero-tolerance policy towards COVID-19. In the last two years it has seen about 12,300 cases and recorded 213 COVID-related deaths. The city is about the same size as London which has suffered more than 19,000 deaths from COVID-19, over the same period.  Hong Kong has done well but now it has a serious problem simply because most of the rest of the world has not done such a great job. So, the city’s leadership desperate to re-open its border with Mainland China, is terrified of importing cases that might damage its COVID-free status, offend Beijing and wipe out its older residents, many of whom are reluctant to get vaccinated.

Hence, this once vibrant entrepot has just about cut itself of from any physical contact with the rest of the world.  It is effectively isolating and throttling itself, simultaneously.  Even returning residents must comply with the extremely stringent 21-day quarantine regime which incorporates no less than nine PCR COVID- tests before even parole will be considered. Good behaviour is not taken into account.

Much of the local news concerns the latest unfortunate citizen to be jailed for falling foul of the recently imposed National Security Law.  Even showing a movie the authorities don’t approve of, can land you in the clink. Detention seems to be the way forward in Hong Kong. Not surprisingly, airline traffic between here and London is almost one way.

After one of the many gender-neutral Hazmat suits had handed out yet another form, passengers were permitted to proceed through immigration control, collect their bags and join yet another queue – this one for the bus to town. Four hours had passed in a slowly unfolding bureaucratic torture and there was nothing in the way of good humour or irreverent banter to alleviate the pain.

The HKSAR government carefully selected the most dilapidated mini-bus for the final leg of our epic journey, some 26 hours after arriving at Heathrow Terminal 5. After our bags were sprayed with some noxious substance, we were allowed to board and sitting in separate seats, grinded and bumped our way through the dark, lesser-known back streets of Causeway Bay district.

Our tour guide for the evening, was a humourless and officious woman with large black spectacles, wearing the obligatory blue Hazmat suit, rubber gloves with matching shower cap and visor, who squawked instructions into her mobile phone and snapped impatiently at the driver. Zombie passengers were deposited furtively, in the concealed rear entrance lobbies of their designated hotels.

Check-in formalities for our room on the 23rd floor of the Best Western Plus Hotel in Sai Ying Pun, were undertaken at a tatty office desk, surrounded by an uneven makeshift wall of Perspex. Hotel staff were dressed ready for any unexpected chemical and biological attack. A bank of glowing CCTV screens displayed multiple hotel room corridors and doors. Staff are monitoring them to check no one steps outside their room during their 21 days of captivity. The police are called if there is a breach.

It’s all very serious and as we were ushered towards the lift to commence our custodial sentence in Q Prison, no one laughed when I asked them what time the hotel bar opened.

What a captivating read, it reads like some kind of science-fiction description of travel. How incredible that you are actually going through this impersonal experience and being confined to a room for 21 days. I don't know how you have coped. When you have finished your "time" I would love to read the next article about what it felt like living in a hotel room for 21 days!